Whilst post-traumatic stress disorder has no doubt been affecting people for the duration of history, it’s only with ‘recent’ developments in the understanding of human psychology, that PTSD has become better understood and more widely accepted. That said, even now the population at large would still mostly associate PTSD with experiences of war and despite the obvious correlations, would not even associate the condition with obvious major traumas such as road traffic accidents, disaster situations and sexual violence. Almost one third (31%) of all rape victims develop PTSD sometime during their lifetime (National violence against women prevention research centre USA).

Post-traumatic stress disorder is the term commonly used to describe the symptoms that some people will experience in response to traumatic events that would normally be outside of a person’s usual life experiences. The symptoms of PSTD/PTSS can often be of a delayed onset, even manifesting years after the original traumatic event. Common symptoms include flashbacks, nightmares, hyper vigilance (always on edge). Therapeutically one of the main objectives is to process the traumatic memory in order to ‘file it’ back into the right part of the brain. Often talking therapies can really help, many people need the chance to tell their stories in detail in a safe environment. Judith Herman talks about a 3 stage model in her book Trauma & Recovery (below)

Michele Rosenthal  is an inspirational voice in the world of PTSD and recovery from across the pond.  She introduced me to the the really interesting concept of ‘throughlines’ in trauma recovery. A though-line is something that was important in your life before trauma that is still around post trauma. This helps to construct a positive post trauma identity based on who you were before and what was important to you. Check out Michele talking about trauma through-lines here. Thanks Michele! 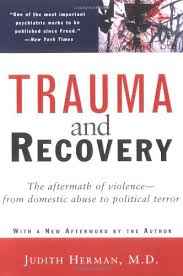 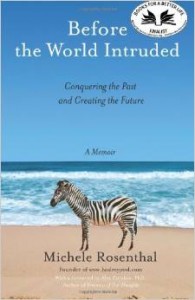 Before The World Intruded by Michelle Rosenthal